Deprecated: Return type of WPSmushRecursiveFilterIterator::accept() should either be compatible with FilterIterator::accept(): bool, or the #[\ReturnTypeWillChange] attribute should be used to temporarily suppress the notice in /home/bestsoca/public_html/marketmakeredge.com/wp-content/plugins/wp-smush-pro/core/modules/class-wp-smush-dir.php on line 1175

Ukraine Bank Runs Could Soon Be Seen In EU And U.S. 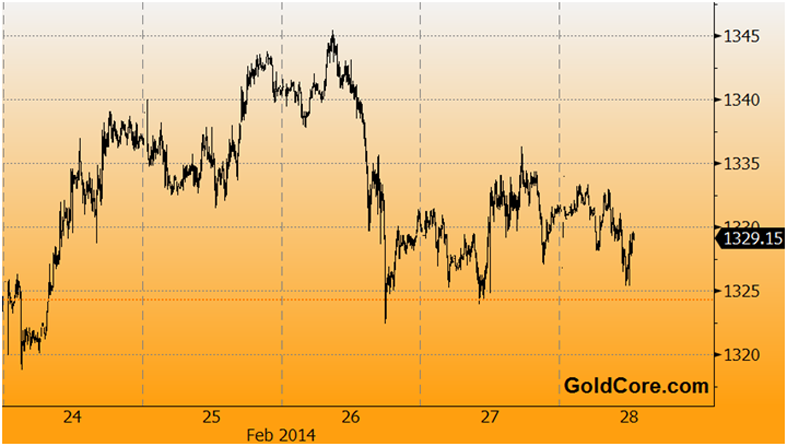 Gold headed for its first back to back monthly gain since August as concern that the U.S. recovery may be losing momentum, concerns about the Chinese economy and turmoil in emerging markets is leading to haven demand. Assets in gold exchange-traded products are set for the first monthly increase in 14 months. Gold ETF holdings climbed 0.4% this month through yesterday and are set for their first monthly gain since December 2012.

China’s economy may exert an important influence on markets again next week. A poor PMI number on Saturday could lead to a renewed bout of ‘risk off’ in markets next week. 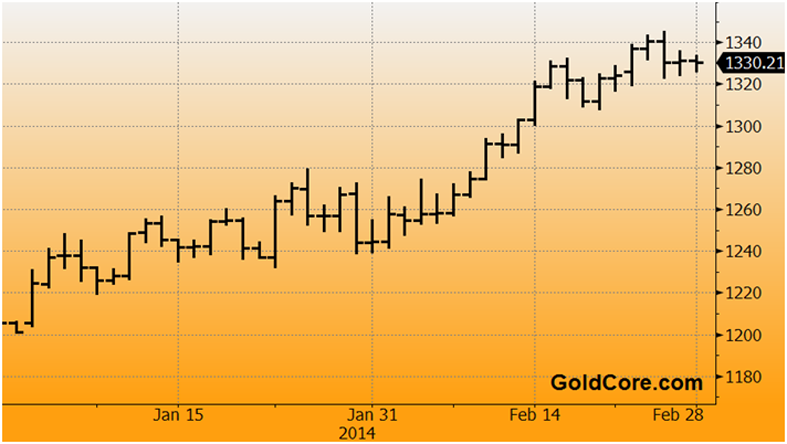 A two-week slide in China’s yuan accelerated today when it had its biggest tumble since 2005 on speculation the the central bank is stepping up efforts to push it lower. A 0.9% drop against the U.S. dollar Friday brought the week’s losses to 1.2%, more than twice the 0.5% loss that spooked the market last week, coming as it did after years of steady gains.

The weakness in the yuan is likely to be temporary as longer term the yuan looks set to appreciate against major currencies – intervention or no manipulation by the PBOC. Were there to be further weakness in the yuan and a prolonged bout of weakness, currency wars will likely rear their ugly heads again as other nations seek to devalue their currencies in order to maintain export competitiveness.

Rising geopolitical tensions between Russia and the West over developments in the Ukraine should also be supportive. This morning Ukraine has accused Russia of invading Ukraine and is considering a state of emergency after masked gunmen occupied two Crimean airports.

Other geopolitical flash points include Thailand, Venezuela and the Middle East which continue to quietly simmer in the background. Tail-risks have increased and could lead to a renewed safety bid for gold in the coming weeks.

The increasing scrutiny by regulators and the media on the manipulation of the gold price should also support gold. The FT’s story regarding manipulation and the likelihood of lawsuits against banks engaged in manipulation was withdrawn from the internet earlier in the week and overnight Bloomberg has again covered the possible manipulation of gold at the London A.M. fix. This story has been bubbling under the surface for years and may blow up in the coming weeks leading to higher gold prices. 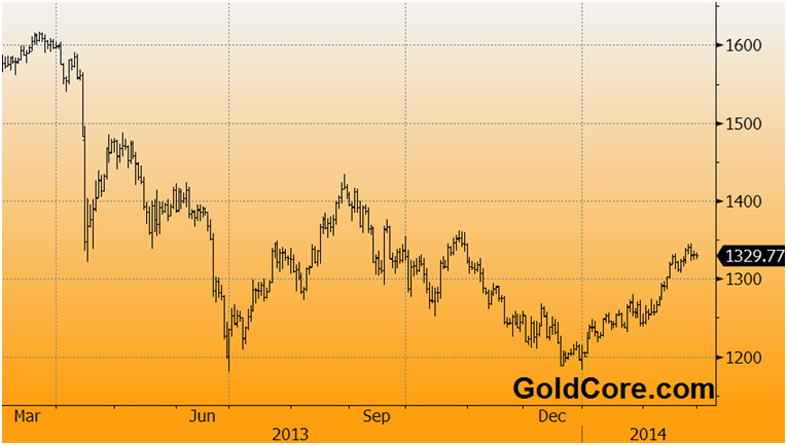 On balance, we are bullish for next week. However, a lower close today and for this week – could cause short term jitters and retracement. Gold analysts surveyed by Bloomberg are divided in their outlook for next week. Fourteen participants were bullish, sixteen were bearish and six were neutral.

Chinese Gold Imports Surge as Yuan Falls Most in Three Years
Chinese net gold imports surged in January and the 83,638 kilograms were more than the first two months of 2013 combined, when just 80,527 kg was imported. Strong Chinese demand may be fueled by concerns by the Chinese about their banking system, the value of the yuan and the risk of inflation. 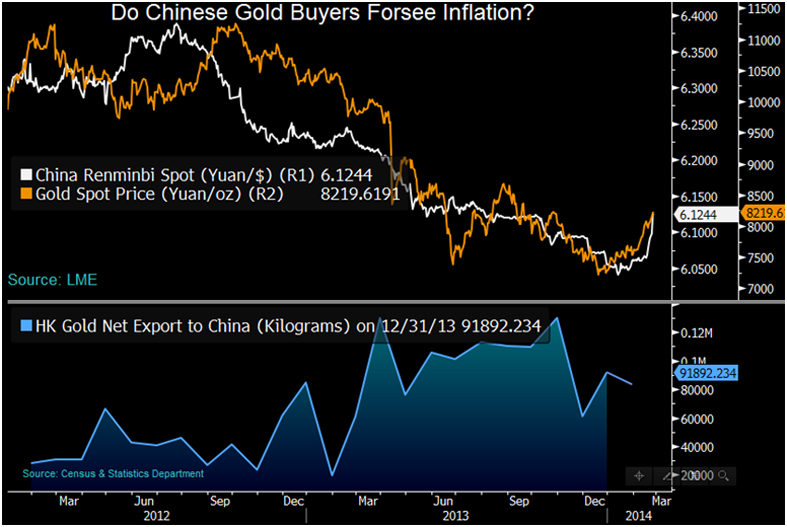 China’s gold imports from Hong Kong fell month on month in January from December as some jewelers and fabricators in the world’s largest consumer of the precious metal reduced purchases from the record levels of demand seen in December, and indeed in full year 2013. 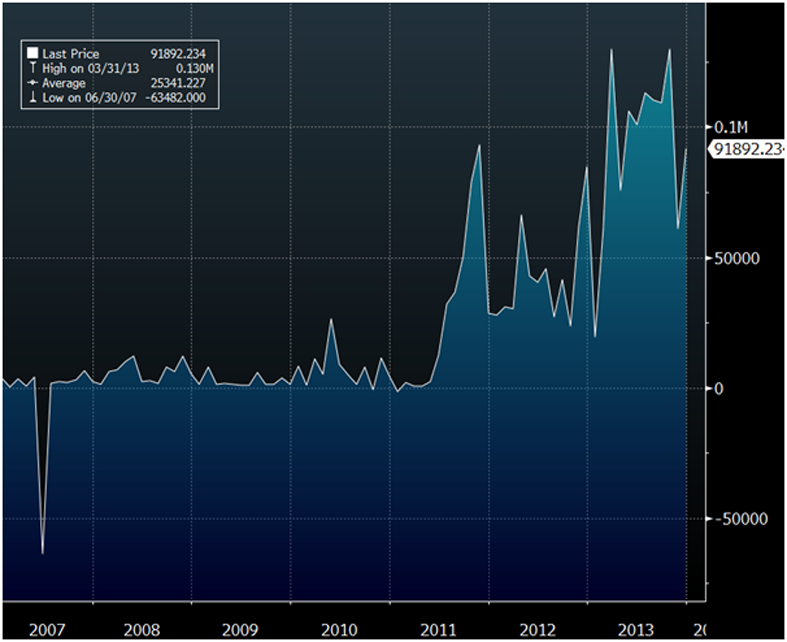 Net imports totaled 83.6 metric tons last month, compared with 91.9 tons in December and 19.6 tons a year earlier, according to calculations by Bloomberg News based on data from the Hong Kong Census and Statistics Department today. Exports to Hong Kong from China declined to 19 tons in January from 34.8 tons in December, the Statistics Department said in a separate statement. Mainland China doesn’t publish such data.

Given increasing geopolitical tensions and monetary risk, we would expect the Russian central bank to continue allocating foreign exchange reserves to gold bullion in the coming months and indeed this trend could accelerate.

Ukraine Bank Runs Could Soon Be Seen In EU and U.S.
Bank runs in the Ukraine and Thailand today and Venezuela earlier this year, show the very fragile nature of our modern fractional reserve banking system. If just a small percentage of depositors withdraw some or all of their cash from the bank, there is not enough cash available.

The newly appointed governor of Ukraine’s central bank, Stepan Kubiv, said last Monday that as much as 7% of total bank deposits were withdrawn from February 18th to February 20th. The $2.9 billion (30 billion hryvnias) in cash was gobbled up by anxious depositors during a time of intense fighting between protesters and government forces in Kiev. 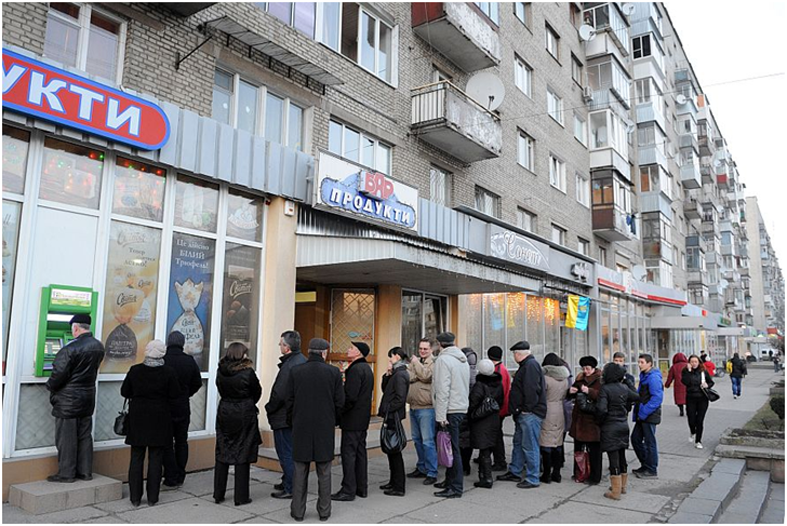 People line up to withdraw money from an ATM in the western Ukrainian city of Lviv, Feb. 20. (Yuriy Dyachyshn/AFP/Getty Images)

In a fractional reserve banking system, if too many depositors withdraw their cash, banks are forced to either shutdown or declare bankruptcy. Typically, they don’t have enough vault cash to pay their depositors. Ordinarily banks in Western countries have just 10% of deposits in cash, although figures in emerging markets may be higher.

But the modern version of a bank run often involves capital flight. Depositors aren’t only going for their cash, they are also wiring their savings out of the country in record numbers through electronic wire transfers. This is a form of silent or stealth bank run, as it is not visible in terms of angry depositors queuing up outside banks as was seen with Northern Rock in the UK and elsewhere in recent years.

On Wednesday evening, we interviewed the publisher of the Trends Journal, Mr. Gerald Celente.

Celente is a contrarian commentator whose opinions are sometimes controversial but always thought provoking. He has a great track record at predicting many of the key financial, economic and geopolitical events of the last 30 years.

In an interesting question and answer session Celente addressed concerns about terrorism, a World War, financial meltdown, the risks of bank runs and difficulties in accessing savings in Europe and the U.S. in the coming months.

He pointed out how Cypriot depositors lost savings in bail-ins and that in the Ukraine today “massive bank withdrawals are going on.”

Celente said that the 9/11 attack and subsequent restrictions on access to bank deposits in New York , when Wall Street was closed down for a few days, may be seen again. He warned of the risk that “ATM machines are not working anymore” and the authorities are “putting restrictions on what you can draw out.”

He advised owning physical gold and silver in your possession and said that the precious metals are like a “cash cow when you have the real deal”.

“If you have gold or silver, you are in a golden position,” Celente said.

Despite the many risks of today, Celente saw light at the end of the tunnel. He said that there are opportunities in “clean food”, breakthrough alternative energy, alternative medicine and in digital education and internet learning.

The video of the question and answer webinar with Gerald Celente can be watched here.