Submitted by Jim Quinn of The Burning Platform blog,

“Economics is haunted by more fallacies than any other study known to man. This is no accident. While certain public policies would in the long run benefit everybody, other policies would benefit one group only at the expense of all other groups. The group that would benefit by such policies, having such a direct interest in them, will argue for them plausibly and persistently. It will hire the best buyable minds to devote their whole time to presenting its case. And it will finally either convince the general public that its case is sound, or so befuddle it that clear thinking on the subject becomes next to impossible.

In addition to these endless pleadings of self-interest, there is a second main factor that spawns new economic fallacies every day. This is the persistent tendency of man to see only the immediate effects of a given policy, or its effects only on a special group, and to neglect to inquire what the long-run effects of that policy will be not only on that special group but on all groups. It is the fallacy of overlooking secondary consequences.” – Henry Hazlitt – Economics in One Lesson 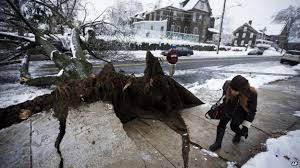 Saturday was the first day since a double shot of snow and ice storms hit the Philadelphia metro area on Monday and Wednesday I had a chance to drive around Montgomery County and witness the devastation firsthand. Over 750,000 homes lost power at the height of the ice storm on Wednesday and over 100,000 remained without power this past weekend. The mainstream media has become such a farce and propaganda machine for vested interests, it is essential to verify with your own eyes everything they report as fact. Their purpose is to entertain the consciously ignorant, exaggerate threats to keep the low IQ multitudes fearful, and function as mouthpieces for the ruling class. Deceitful corporate executives, mendacious government apparatchiks, and oblivious teleprompter reading media talking heads have been utilizing cold weather as an excuse for every poor earnings announcement, horrific employment report, and dreadful decline in retail sales. It certainly has nothing to do with decades of stagnant household income, awful monetary and fiscal policies, or the consequences of Obamacare.

We have become a delusional state dependent upon fallacies to convince ourselves our foolhardy beliefs, ludicrous economic policies, corrupt captured political system, and preposterously fraudulent financial system are actually based on sound logic and reason.  Some fallacies have been perpetrated intentionally by the ruling class to manipulate, sway and deceive the populace, while others have been willfully employed by millions of techno-narcissistic iGadget addicted zombies as a substitute for thinking, reasoning and taking responsibility for the course of our nation.

You have men who constitute the unseen true ruling power of the country making a conscious and intentional effort to peddle fallacies to the masses in order to manipulate, mold, and corral them in a manner beneficial to the ruling power, financially, politically, and socially. The ruling class has been hugely successful in their capture of the public mind, creating a vast majority of the willfully ignorant who desperately grasp at fallacious concepts, beliefs, and storylines in order to avoid dealing with reality and being accountable for their actions and the actions of their leaders.

The Next Big Thing in Finance!

Bitcoin Update: “Your Money May Be ‘Tied Up’ In Unconfirmed Transactions”