Gold In 2014: Scramble For Physical Gold As Price Manipulation Unravels?

Gold in USD – This Week

Gold is marginally higher in all currencies this morning but is trading near a one-week low and headed for the first weekly loss since December. Gold rose as much as 8.2% from the 6 month low set December 31 and reached a 2 month high of $1,279.61/oz prior to weakness this week.

Speculation that the Federal Reserve may reduce their massive bond buying programme may be making traders nervous. The Fed said on Wednesday that it will cut its monthly bond buying to $65 billion from $75 billion.

Gold traders and analysts are bullish for prices next week due to the likelihood that the emerging market asset sell will lead to haven demand. The Bloomberg gold survey shows that that for next week, there are 16 bullish analysts, 10 are bearish and 4 were neutral on prices.

It is important to note that gold has rallied since and despite the Fed’s taper in late December. It is also worth noting that the Fed’s printing of nearly $0.78 trillion a year or $65 billion a month to buy U.S. government debt remains extraordinary and shows how fragile the U.S debt markets and economy still are.

There is also the possibility that the emerging markets crisis impacts developed markets as was seen in the Asian crisis in 1998. In our vastly interconnected financial and economic world, the notion that there will not be knock on effects may be proven to be optimistic. The risk of contagion remains as turmoil in markets tends to be contagious

As long as the turmoil continues in the emerging economies and U.S. and global stock markets come under pressure, gold is likely to remain in demand as a safe haven.

Economic concerns and the risk of currency devaluations in emerging markets may lead to greater demand for gold in those markets.

People in Asia and especially China, India view gold as a store of value and one of the key reasons that they own gold is in order to protect against the devaluation of paper currencies. It is hard to get data on gold demand in many smaller emerging markets countries such as Argentina, Venezuela and South Africa but it is safe to say that a sudden bout of currency weakness should lead to inflation hedging buying.

The data from Turkey shows that demand has been very robust there in recent months and should the lira continue to decline in value, the gold souks in Istanbul will do brisk business.

Growth in emerging markets, especially China and India, contributed to much of the commodities demand we have seen in recent years. Thus a slowdown in China and other economies could hurt demand for commodities in general. However, gold’s store of wealth and money credentials should see it insulated from this due to safe haven demand. 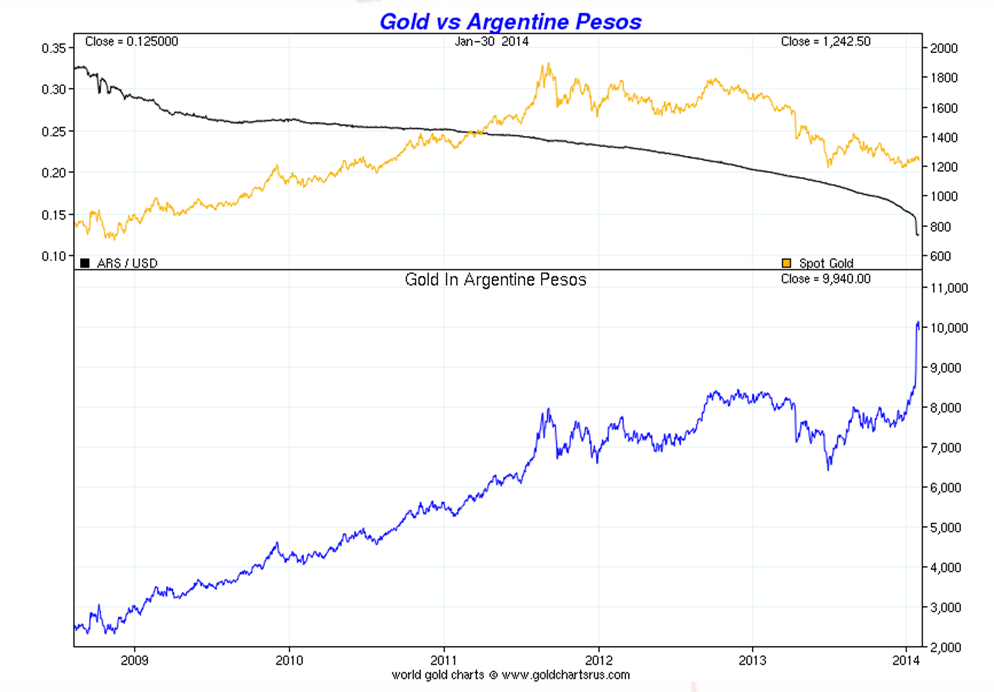 There is still a debate amongst many in the western world about whether gold is a safe haven.

However, in China, Asia and most emerging markets there is a strong belief in gold as a safe haven due to their experience with paper currencies. People in Argentina can attest to that fact after their currency, the peso, fell 25% against gold in January alone.

The currency crisis in the emerging markets may lead to a renewal of the recently dormant currency wars and may be a prelude to a global currency crisis. Just this week, the World Bank’s former chief economist said the world should replace the US dollar with a single global super-currency, saying it will create a more stable global financial system.

“The dominance of the greenback is the root cause of global financial and economic crises,” Justin Yifu Lin told Bruegel, a Brussels-based policy-research think tank. “The solution to this is to replace the national currency with a global currency.”

The currency and gold wars of recent years are set to continue.

Grant Williams’ excellent recent article on the continuing gold wars is a must read.

Grant Williams and the team at Mauldin Economics have been producing excellent market commentary and insights for many years. Williams has written ‘Things That Make You Go Hmmm’ since 2009 and it has become a must read weekly commentary.

Grant’s recent edition grabbed our attention for a number of reasons: